We started our experiment with having bloggers create guess games this week. Our assumption is that bloggers will not only help us generate content, but more importantly, bring their friends and fans to Knapkins to play their own games. This is the first step in building social right into our app. The next iteration would be to have people create games solely for the purpose of challenging their friends. Kind of like Zynga’s Hanging With Friends for recipe guessing.  We also started being more rigorous in defining our experiments. So far we’ve just been shipping and looking at data after the fact to make sense of things. Now we are making sure that we have the right cause and effect metrics (or measuring of metrics) nailed before launch, along with our assumptions and predictions of course. Will go into more details on our process next week. For now, here are some screen shots of our guess game create process. 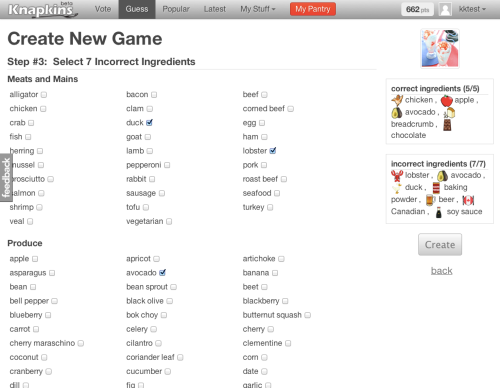 Shipped our first version of the recipe guessing game this past weekend. We’re pretty excited since we’ve been talking about this game for a while now, and its the first major addition to Knapkins that’s not tied to our voting feature. The game is a good addition to help us carry forward the vision to make recipe discover more fun and social. The next couple of iterations will be to make this more into a social game where our players create their own games and challenge their friends, taking inspiration from Hanging With Friends. So far the response has been great. One player emailed us saying that their “drunk husband loves the game and wants more”. Hehe. Its good to see that we’ve made someone happy. Total dev time around 4 days? Here are some screenshots. 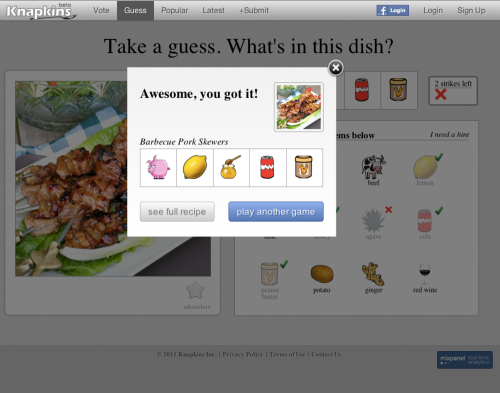 After a long delay and living with a half implemented and deactivated points system, we’ve finally pushed out the first iteration. So far, it includes a points system for the actions we want our users to do most, and a few challenges. Just looking at the past few days data since it was pushed, our user engagement has gone up significantly. Let’s see how it does in the next couple weeks.

Last week we added the ability for food bloggers to see who their biggest fans were by vote and by favourited. We also added a ‘send thx’ button (that led to a popup saying feature will be added soon) to see if they were interested in engaging with their fans, and we were happy to see that many of them were. So yesterday, we added a messaging feature to allow our users to interact with each other. We are starting with a blogger initiated message off their fan page, but will be adding it to various spots in the app as well for exchanges that are initiated by the user. Let’s see how this goes. The messaging system only took about a day to build since its a simplified version of the WoC messaging system, and we were able to borrow a lot of the interaction designs from facebook’s messaging system (although the look can definitely use some help).  Here are a couple of screenshots. 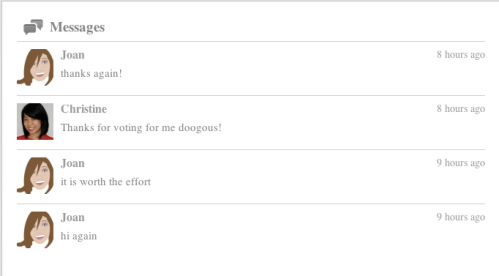 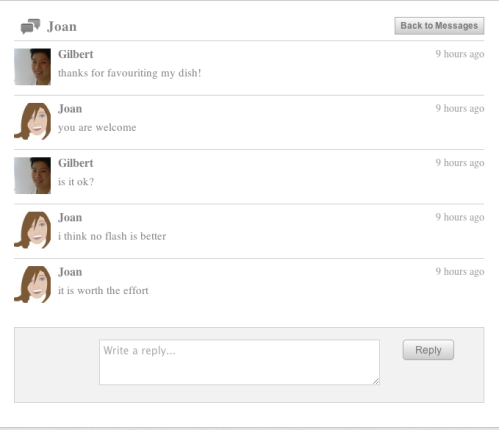 Its been a while since I’ve posted about product updates, so here we go.

First up, we have a new nav courtesy of Twitter Bootrap. Its clean and has everything I need.

A common feedback we got from test users was that they didnt really ‘get’ the site until after they’ve completed a bunch of votes. So our first attempt to remedy this issue was to add a short description/tag line on the front page, and also add a most popular summary section to the top of the home/votes page so they kind of get whats going on. We still have not added the tag line 😛

A couple of bloggers had mentioned that they would like to see who’d favourited or voted for their dishes. This could be a good starting point to initiate exchanges among our users, which we think can improve retention and is also the direction we want to move towards. Having Knapkins become more of a community site than a content site. This feature is also another differentiating factor from our competitors.  The send thx feature will be implemented later on (just tracking the clicks for now).

We’ve automated our drip campaign emails, new photo added emails, and tweets. The emails have been very effective in terms of bringing users back, and twitter surprising has been a good source of traffic for us.

We finally added real ads from Adsense, as opposed to the fake manual ones we had before.  It actually took a lot less time to setup the real way! Lesson learned. Fake and implement later is not always the quickest and best way to do things.

I’m apparently a target for vidcaster and airbnb.

Finally, we’ve added mixpanel to our analytics arsenal so that we can better track our cohort retention. I like them so far. We’ve also made some additions to our app so that we can better track retention from our own data as well. More fine grain things that is outside of mixpanel, but hopefully, their app can cover most use cases as pulling manual reports from our db is not the funest thing to do. The game plan though is for us to really step up the analytics side of things and tie it directly to our product development. Have it drive and also validate/measure our development efforts.  Christine will talk more on this subject soon.

One of the biggest complaints from food bloggers about aggregation sites was that the picture submission process was a pain.  Every time they wrote a new blog post, they had to go to each of the food aggregation sites and make a submission.  So we decided to automate this process for them.  What we would pull in new pictures from their RSS feeds, add them to our site, and notify them once their picture was up.  We threw up a sign up page describing this process and emailed a bunch of bloggers requesting them to sign up.  Christine then manually simulated this automation process for them.  The response was very positive from the bloggers.  One even said that we were “a dream to work with” since they didn’t have to do the tedious work of uploading anymore.  As the list of blogger signups piled up though, the manually process was difficult to keep up with (not just the initial picture uploads but monitoring their blogs for updates).  So last week our tools finally caught up with the promise of an automated process.  Our app now does a nightly pull from all the signed up blogs, and pulls in new updates into our system.  The only manually step required is to add some tags to each entry, approve it, and its live.  Here’s a screenshot our system. 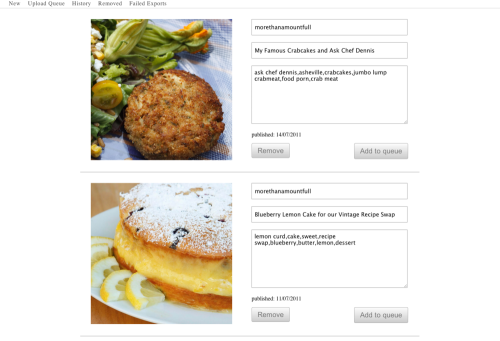 Now that we have a system to add new pictures to Knapkins, we are able to provide a “time” component to our users.  Pictures can be sorted by new this week, new this month, and all time, much like the other food blog aggregators  Users are now presented with fresh content on subsequent visits.  A first step on planning for retention.

A final component we added was the idea of rewards/items/badges, and more importantly, cleaning up the signup prompt and flow.  The goal is to increase our signup activation step.  Screenshots below:

Today’s focus was on setting up the project to be more metrics driven.  Made the appropriate additions to the app to correctly tracking our acquition and activation points, and added the follow goals on GA:

activation: signup (setting up for retention)

retention: not there yet 🙂

In addition, also made the following updates to the app:

Here’s a link to Dave’s Startup Metrics for Pirates video that we watched this morning:

We’ve been busy.  For the past couple of weeks we’ve been looking into the foodie/food bloggers space.  We feel that there’s a health community there and that there’s room for value add into this community.  So, we are shipping our first iteration/feature today, a food blog aggregator that also allows users to vote between 2 photos.  Kind of like a Facemash for food from food blogs.  The goal here is to enhance the user interaction from traditional food blog aggregation sites, while allowing the community to upvote the best looking dishes.  Development time of around 7 days from start to launch.  Here are a few photos. 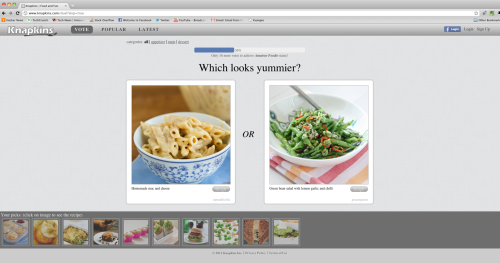 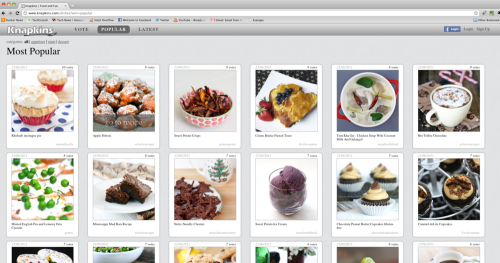 Today, I wanted to get a feel of the contracting market.  I wanted to see 1) what people were looking for, 2) where they were asking for it, 3) test out different markets and approaches and evaluate the responses.

I found the most up to date opportunities on craigslist and kijiji so I spent most of my day there emailing.  I ended up contacting 10 posters that were looking for RoR help and had conversations with 2 so far.  Here’s a template of my message:

I’m interested in your RoR Developer posting.  I’m an experienced engineer and have worked exclusively in RoR for the past 2 years.  You can find my CV here http://www.linkedin.com/in/kevintsoi.

Here’s a summary of my qualifications:

I cannot do designs, but besides that, I can pretty much do everything end to end in launching web products (including implementation of designs).
As mentioned above, I am currently working on my own startup and I’m looking for side projects to seed it.  My rate is $75/hour.  Let me know if you think I am a good fit for what you are looking for or if I can help your team in anyway, and if so, we can chat further.
Cheers,
Kevin

My search on other “contracting services” sites were unsuccessful.  Sites such as elance and rentacoder seem geared towards bargin shoppers, and other contracting niche sites were not up to date.  My next move was to contact placement agents and see what kind of short-term flex contracts were available.
The pricing of $75 seemed reasonable.  One responded that their current position was for $60, but another responded and suggested that I should raise it to $90.
Christine took a different approach and looked for founders who wanted their ideas implemented.  She emailed 150 people on the cofounder list and received 3 positive responses, and 2 negative responses.  Her message template is as follows:

Hi guys,
We are a team of two that can get anything done. Our backgrounds are technical, business, marketing and entrepreneurial. As Myers–Briggs, my partner and I are complete opposites ESFP and the other INTJ. If you or a friend are looking for help on your business, please contact us atchristine@evangee.com.
– Quick one day or one week turn around
– Soup to nuts developer and Customer development
We’ve investigated
– professional networking tools
– social media analytics
– mobile platform to distribute mobile rich media for Universal, Sony, Warner and major music labels
– social recruiting
– human resources monetization of employee referrals
– social enterprise and fundraising for charity
– event planning tools
– food blogs
Cheers,
Christine

The surpising part was that the people who responded seemed to be technical as well, and wanted extra help which wasn’t our initial target of business people with ideas.
Just received a positive email from an NGO looking to have some web dev work done.  Perhaps that is our niche given our background in the sector.
That’s it for the day.  I would liked to have seen more RFP type projects from established companies, but I’m guess that they usually work with companies in which they have a deeper relationship/partnership with.  Will need Christine’s mad calling skills to make those discoveries.  Perhaps its just a matter of timing/volume on contacts, as was the case with cho & associates.  Will update any progress from today’s contacts.